Notre-Dame de la Paix, built in Ivory Coast’s administrative capital Yamoussoukro between 1985 and 1989, is a church of such national pride that, during the country’s decade of periodic civil conflict, citizens often sought refuge within its walls, knowing it would never be attacked.

Bishop Siméon Ahouna recalls one visitor in particular, General Guéï – who fronted the West African country’s first coup in 1999 and then ruled for 10 months – turning up at the basilica late one night. “It was in 2000, and he came to pray. My advice to him was not to cling to power,” says Ahouna, who heads the foundation charged with looking after the world’s largest basilica. “It wasn’t just him, either; whenever there were political crises, people would come and shelter because nobody would ransack here.”

Events surrounding Guéï’s assassination two years later plunged the country into a decade of civil turmoil, the seeds of which had been sown by ageing former president Félix Houphouët-Boigny, Ivory Coast’s “founding father” and the man who built Notre-Dame de la Paix.

As the 1980s drew to a close, Houphouët-Boigny was nearing the end of three decades in power. Under his regime, Ivory Coast had grown rich on the back of cocoa exports and soaring world commodity prices. Not one to do things by halves, the leader affectionately known as “The Old Man” lavished much of that money on monuments – mostly in honour of himself.

In the economic capital, Abidjan, he built the towering Hôtel Ivoire, a favourite for French expatriates which for a time possessed the only ice-skating rink in West Africa. His birthplace, Yamoussoukro – formerly a small agricultural village – became home to a palace surrounded by a crocodile-filled lake; a visit there inspired VS Naipaul’s celebrated essay “The Crocodiles of Yamoussoukro”, in which the writer suggested the reptiles symbolised Houphouët-Boigny’s mystique over his people.

Elsewhere in Africa, other strongmen whose coffers were swelling on the commodity boom were doing similar things. Ivory Coast’s 3,000-metre airport runway was one of only two on the whole continent that was long enough to land a Concorde; the other was in the Democratic Republic of the Congo (then Zaire), where President Mobutu Sese Seko built the “Versailles in the Jungle” in his birthplace of Gbadolite. 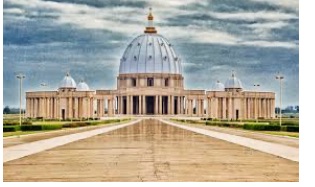 In 1983, Houphouët-Boigny rechristened Yamoussoukro as his country’s new capital. Another crop of grand monuments followed, including the five-star Hôtel Président and a marble-floored, rarely-used convention centre. But neither embassies nor ministries ever relocated from Abidjan, so Notre-Dame de la Paix’s chosen location is a near-deserted, forest-surrounded town of empty six-lane highways that led nowhere.

The resulting building was – and still is – staggering, nonetheless. A sudden mirage rises on a stretch of lonely scrubland; kaleidoscopic stained-glass windows and ivory-white columns are topped with a giant pearl dome that rises 158 metres above the bush. Inside there is standing room for 11,000, while each of the 7,000 seats in the nave has its own personal (Italian-built) air-conditioning system. Five-thousand shades of stained glass make up the windows, including one depicting Houphouët-Boigny kneeling in front of Jesus. 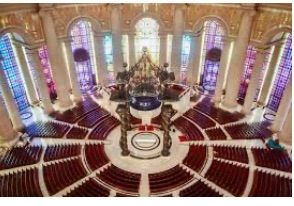 The history behind Notre-Dame de la Paix’s construction is no less dramatic; negotiations with Rome were apparently fraught. Loosely modelled after St Peter’s basilica in the Vatican, Pope John Paul II requested the cupola be slightly lower so as not to surpass the papal one. Houphouët-Boigny complied, but instead topped it with a giant golden cross, making this the world’s tallest church.

Pierre Fakhoury, the celebrated Lebanese–Ivorian architect behind the monument, frequently batted away claims that the basilica was intended to be the world’s largest. “This project from Houphouët was fundamentally driven by his faith. He had a deal with Ivory Coast, but most of all he had a deal with God,” Fakhoury said in an interview on the basilica’s 20th anniversary. “The intention was never to surpass [St Peter’s in] Rome. But we surpassed it because evolutions in architecture … allowed us to go much further than previously possible.”

In light of the basilica’s brash imitation of the Vatican’s holy shrine, a reluctant John Paul II consecrated the building in 1990 only on the condition that a hospital be constructed near the church. To date, that hospital remains unfinished.

Controversy also surrounded the financing of Notre-Dame de la Paix. By the time the basilica was finished, the Ivorian economy was reeling from a crash in world commodity prices, and so its estimated US $300 million tag raised eyebrows. The cost of the church’s construction had doubled the country’s debt. 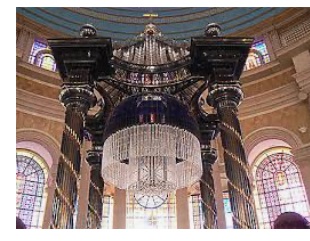 Maintenance today costs around $1.5m annually, paid for by the foundation set up by the former president. “He thought about everything, because this was inspired by God,” says Bishop Ahouna.

With less than one-third of the nation’s population Christian, attendances at the basilica’s services are low – usually numbering in the “few hundreds”, according to 63-year-old businessman Jean Baptiste Golly, a regular attendee. “But you know what? I remember when this site was just farmland and yam plantations. It’s incredible to think that today, it is a place which inspires prayer and soothes the soul.”