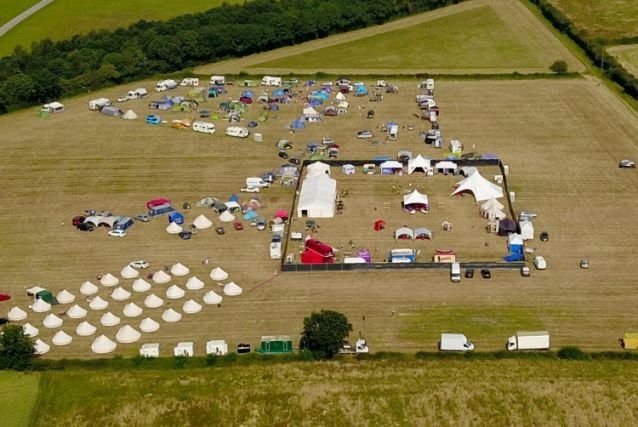 Europe's biggest swingers party gets underway this weekend - in a field in Worcestershire.

The location for the event, called Swingfields, has been revealed using handwritten "SF this way" signs around Malvern.

The site is a closely-guarded secret and ticket holders who pay £170 for couples are only told 48 hours before the festival gets underway.

Free sun cream is being provided for revellers to stop them going red raw in the sun, as high temperatures are predicted throughout the weekend.

The festival is said to be Europe's biggest such event (SWNS)

Drone pictures of the field near the Three Counties Showground - opened by the Queen in 1958 - show a red double-decker party bus and gazebo covering several double-beds.

Large sex hammocks have been placed in the centre of the site for attendees to relax on.

Other pictures showed four-poster beds dotted around the site as well as mysterious tents and marquees in the corners of the field.

Paddling pools have also been erected around the festival with a line of chairs set up nearby so that crowds can watch others make a splash.

The swingers are being provided with free sun cream (SWNS)

On Friday night partygoers will be encouraged to dress up as cowboys in a “raucous Wild West” themed night.

The official Swingfields website states: "This three-day event will be working alongside ALL lifestyle groups, including LGBT communities, to ensure we deliver a fun and entertaining event for all.

"We have luxury showers and toilets available, and for those self catering this year we also have washing up facilities.”

Organisers are also offering glamping pods complete with bedding included to allow revellers to “just turn up and relax.”

Residents in the area say they are happy for the sex festival to go ahead as long as the revellers don't leave the compound.

Sylvia Hartley, 40, said: “I’m not bothered what they do inside the festival as long as they don’t leave it but I suppose, why would they?

“The festival was here last year and no one seemed to have any problems. It’s just people having sex in the open air.

“There are far more unhealthy pursuits people can do. If I wasn’t in a committed relationship I’d be tempted to go along myself.”

A volcano has erupted on the small Italian island of Stromboli, killing one person and forcing frightened tourists to jump into the sea "out of fear". The victim was a male hiker who was hit by a falling stone, while other people were injured. Firefighters have been on the scene battling flames on the island. The volcano is one of the most active in the world and has been erupting for over 2,000 years.