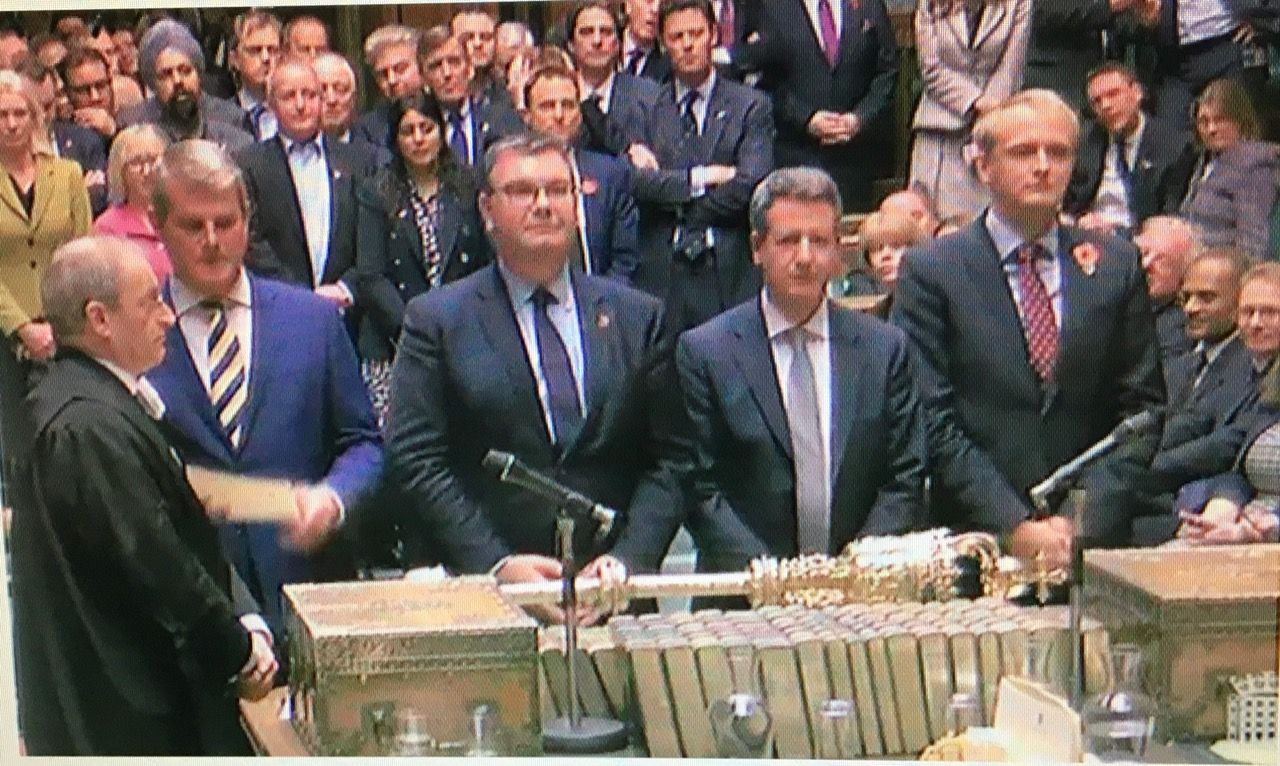 Election result likely to catch out the pundits.

Tellers in the Commons on Tuesday 29 October giving the result of the vote to hold an early general election. Photograph: PRU/AFP via Getty Images

With four main parties in the fray, predicting what will happen on 12 December is devilishly difficult

Tellers in the Commons on Tuesday 29 October giving the result of the vote to hold an early general election. Photograph: PRU/AFP via Getty Images

Welcome to the Guardian’s weekly Brexit briefing. If you’d like to receive this as a weekly email, sign up here. You can catch our latest Brexit Means … podcast here, and for daily updates head to Andrew Sparrow’s politics live blog.

After reluctantly accepting the EU’s offer of a 31 January Brexit extension and falling short of a two-thirds majority for an election under the Fixed-term Parliaments Act, Boris Johnson abandoned all attempts to get his Brexit deal through the Commons.

Instead, the prime minister tabled a short bill to change the law in order to hold a poll on 12 December – a move that would require only a simple majority and so could be passed with the backing of the Liberal Democrats or the Scottish National party.

In the event, both abstained after their preferred date of 9 December was rejected – but the Labour party, declaring the opportunity a “once-in-a-generation chance to transform our country”, backed it and it sailed through by 438 votes to 20.

At the fourth time of asking – and rather than granting MPs more time to scrutinise an agreement that they had passed with a majority of 30 at second reading – Johnson had the election he wanted, Britain’s first December poll since 1923.

The prime minister warned his forces it was going to be a hard campaign, however, and got an early reminder of just how hard when Nigel Farage gave him a two-week deadline to drop his Brexit deal or face a Brexit party candidate in every seat.

With Farage’s party plainly set to challenge the Conservatives for every leave vote it can, Johnson felt the need to apologise to Tory members for not taking Britain out of the EU on 31 October – as he had promised to do “come what may”.

He also is unlikely to have welcomed the public interventions in the UK campaign of Donald Trump, who has twice said he hopes the prime minister, a “wonderful guy”, and Farage should come together on a united political platform.

Labour, which is promising to negotiate a new deal with Brussels within three months if it wins and put it to a referendum in six, is determined for once to show unity: “The debate on Brexit is over,” Jeremy Corbyn told his fractious shadow cabinet.

Polls, meanwhile, put the Conservatives well ahead (although they did so, too, of course, in 2017). But tactical voting could be a game-changer, with the People’s Vote campaign preparing to start spending a £1m war chest despite a continuing conflict within the organisation.

Most serious analysts and commentators warn strenuously that voter volatility, the revival of the anti-Brexit Lib Dems, the emergence of the pro-no-deal Brexit party and – as ever – the unpredictable effects of Britain’s first-past-the-post electoral system mean this will be an election of quite exceptional complexity.

It would take a fool, therefore, to predict the result. But it is worth bearing in mind that victory for Johnson can only be an absolute majority in the Commons, since there is no reliable alliance he can build for his deal. Victory for the rest could mean simply getting enough seats between them to deny him that majority.

Looking further forward, Michel Barnier, the EU’s chief negotiator who has just been appointed to lead the bloc’s taskforce on future relations with the UK, issued a timely reminder that ratification of the exit deal was only the start of Brexit.

That future relationship still has to be hammered out – in 11 months unless the transition period is extended, which experts consider inevitable – and Barnier warned British companies could expect barriers to trade with the EU if the government seeks to abandon EU social, environmental and consumer standards.

His new watchword: the EU will be happy with an agreement that features “zero tariffs, zero quotas … and zero dumping”.