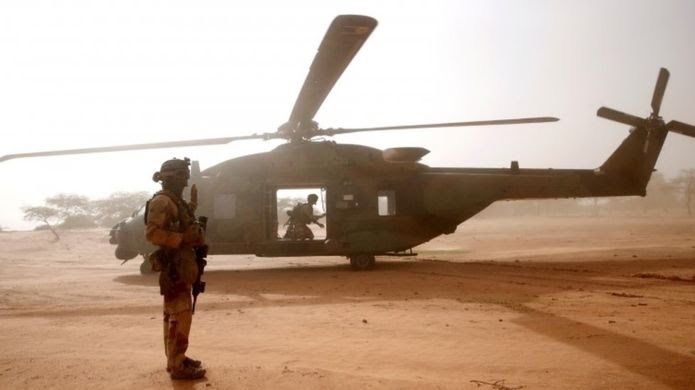 It's believed to be the biggest single loss of life for the French military since the 1980s.

French President Emmanuel Macron expressed his "deep sadness" over the incident. An investigation has begun.

In 2013, France deployed thousands of troops to Mali after Islamist militants seized huge parts of the north.

Mali's army has since recaptured the territory but insecurity there continues and the violence has spread to other countries in the region.

France now has 4,500 troops deployed to support the forces of Mali, Mauritania, Niger, Burkina Faso and Chad against Islamist militants.

The Tiger attack helicopter and Cougar military transport collided mid-air on Monday when they were supporting ground forces engaging insurgents near the borders of Burkina Faso and Niger.

Among the dead was the son of centrist Senator Jean-Marie Bockel, the politician told the AFP news agency.

"These 13 heroes had only one goal: to protect us," President Macron wrote in a tweet. "I bow my head to their loved ones and comrades."

Another French soldier, Brig Ronan Pointeau, was killed earlier this month after an explosive device detonated near his vehicle.

In total, 38 French soldiers have been killed in Mali since the country first intervened.

The brunt of the violence though is faced by local forces and civilians. An attack on a northern military post this month left 53 Malian troops dead.

French mission grinds to a halt : Analysis by hugh Schofield.

The helicopter accident that has killed 13 of its soldiers is more bad news for France from a combat mission already beset with questions over its efficacy and purpose.

After initial successes in suppressing Islamist rebels in northern Mali in 2013, the French deployment was extended into a regional mandate under the operational name Barkhane.

But recent months have seen a resurgence of groups linked to Islamic State and al-Qaeda, with the focus of their activity shifting to the centre-east of Mali and the area bordering Niger and Burkina Faso.

Writing recently in Le Monde, a former defence co-ordinator at the French foreign ministry warned that operation Barkhane was "in an impasse".

"On the ground the facts are plain. The rise in strength of the jihadists is a reality we can no longer deny. It is they who have the initiative," wrote Bruno Clément-Bollée.

"In the Sahel, France has a lot to be worried about… We seem to have no idea how to get out of the quagmire."