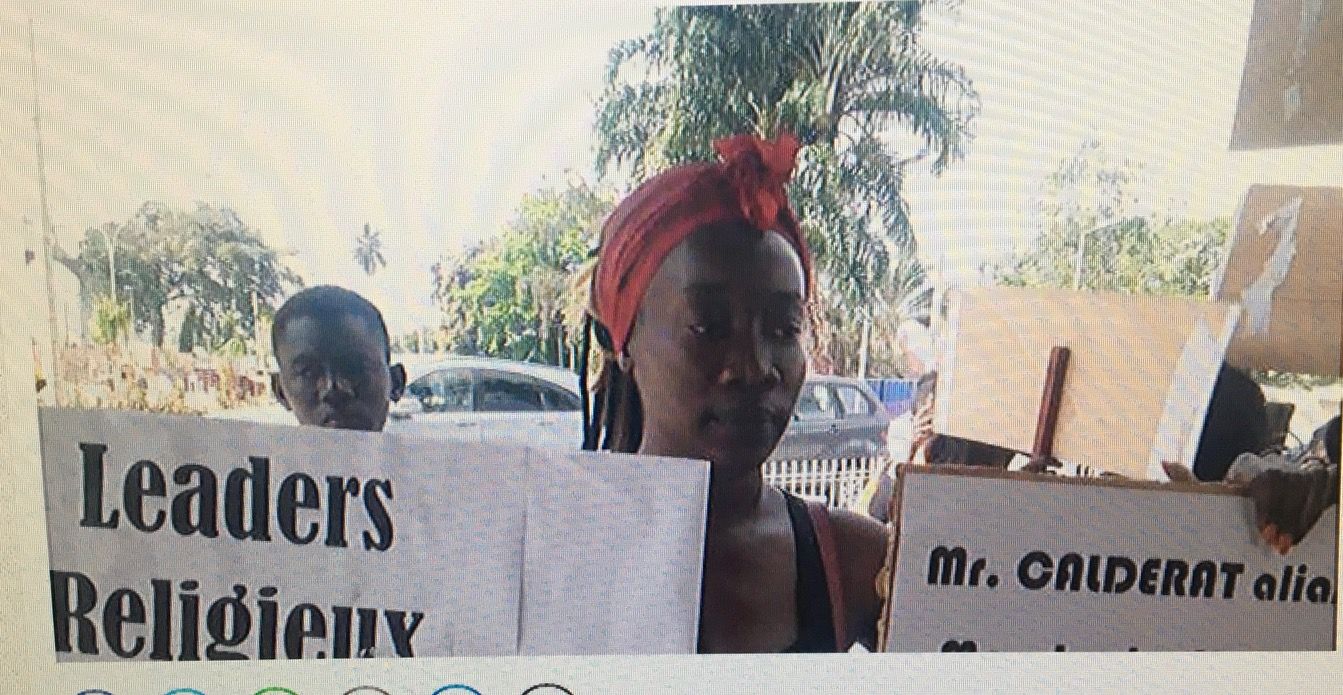 Ivorian public opinion has been shocked by an alleged rape in recent days involving Calderat Franck-Emmanuel, the owner of the famous Planet BMW restaurant located at the entrance of Cocody-Les-Deux-Plateaux.
He was accused by his wife in front of journalists of raping his four-year-old girl whose name we are ignoring. She went further by mobilizing Ivorian civil society organizations for her cause. Some organizations have improvised a march in denunciation of these cases of rape that become recurrent these days.
The case was relayed by the daily L'Inter of Olympus group on Friday, November 22, 2019 in its '' Society ''.

According to this newspaper, which gives the version of the mother Kanga Akassi Victoire, one evening when the mother had returned home after her work as manager of several clothing stores, she finds that her little girl is in her little heels that the father bought. And when she asks the father what was wrong with the girl, it has nothing good to say to him if it is not to jump in his vehicle to leave. It is the girl herself who will respond shortly after the mother's concern by saying "it's dad". Then the mother continues: '' I send the girl in the room, I spread her legs and I see a big hole. His cock is open and shea butter has been buried there. I ask the girl who did this to you, she tells me it's dad. I called the father to ask him to come back urgently that there is something I do not understand. She has to be brought to the clinic because she apparently has been touching. Someone touched him sex.

This version of the facts, according to Mr. Calderat that we met at his restaurant, is far from the truth. This is a case that exposes, according to him, one of the last tricks of his wife whose excessive ambition is becoming more and more acute.
It is aimed at one goal: to disqualify the husband and enjoy all his property. It is the air of disappointment, with a touch of bitterness that Franck-Emmanuel Calderat recounts his story which we will spare some details related to the private life of the couple. He calls into question '' a narcissistic perversion '' of his wife with whom he contracted the wedding in 2011 in Paris after having met her for the first time in 1994 at her restaurant where she had come to look for work. The couple had three boys and a little girl, who is currently paying attention in the family.
At the material time, divorce proceedings are latent before the courts.

Responding to the rape mentioned here, Mr. Calderat writes in a memo given to the press: "Most of the time, out of school hours, she leaves the girl in the small studio in Aghien of her sister Alika, studio attached to a courtyard where children and teenagers are crammed to their own devices. For having kindly asked him to let this little one from time to time evolve in the family setting between his brothers and to the good care of the maternal nannies, his wife, taken with anger, loudly opposed this request before to isolate totally in her room where she took her meals on the floor, doing, so to speak, radio silence by not speaking to anyone, not even their children. That his wife, who was probably feeding an ulterior motive, began to watch their boys, preventing the girl from approaching them as if they were sick of the plague. Wishing at all costs to leave the matrimonial home, as she had already become accustomed to, with the latter at the beginning of the divorce proceedings she was considering, without having to wait for the stage of provisional measures relating to custody children, she felt the need to establish the proof that this home presents for this girl, a moral and physical danger, as it would be exposed in the said home, touching that it could suffer from his brothers. She imagined this pretext by referring to the vulvitis of which the girl had previously suffered and on the occasion of which she falsely accused the boys of touching their sister by putting their finger in her "foo". Knowing that these facts only exist in her mind, she was forced to fabricate false evidence against these boys. The testimony of the nannies, on this subject, is edifying. After accusing the boys of touching their sister on the basis of evidence made by her, as indicated by the report of the commissioner of justice, she changed her tune to now set her sights on the father, his husband, while remaining in this dynamic of making false proofs, of gross lies against him. "

A medical certificate of absolute nullity?
Clearly Mr. Caldérat indicates that his girl was never raped by him who is so attached to his children. He argues that the infant suffered from vulvitis (an inflammation of the vulva) as diagnosed by the clinic doctor who prescribed appropriate medications that eventually relieved the patient. Then Mr. Caldérat to protest against the medical certificate waved by his wife during his meeting with journalists.
Mr. Caldérat swears that the said medical certificate, issued by Dr. Sanoh Laye on July 7, 2019 is a week after the first pains of the small, is null and absolute nullity in that it suffers from certain defects. "In fact, Lady Kanga, in her statement recorded in the police police station of the 12th district and sent to the prosecutor on August 9, 2019, stated that she was first consulted with a doctor whose name she does not mention, officiating in a clinic she does not give the name. Which doctor would have told him that there was penetration and oddly, she did not ask for a medical certificate, "counter-attack the French businessman born in Fez in Morocco. He infers that a medical certificate that must see facts immediately can not be taken seriously when it is issued a week later. He adds that the mother Kanga herself provoked the inflammation of the girl's genital organ by introducing hot drugs taken from a gentleman and that advised him to be the only one to introduce the said drugs into the bowel of the little. She would have regularly spoken to the nannies who said so in their testimony. Anything to make you believe in a rape.

For Franck-Emmanuel Caldérat, his wife is a manipulator who, in the fabrication of her proofs, forgets that she has sensible people in front of her. "The reality is that this unworthy mother, this monstrous and Machiavellian lady fabricated false evidence by cruelly torturing the girl of 3 years and a half. All this suffering inflicted on the girl was intended to obtain the separate residence order n ° 2378/2019 issued on July 16, 2019 by the matrimonial court and thus validate her leaving the family home with the child without the authorization of the husband and without waiting the provisional measures ", insists Mr. Caldérat, this former French cooperant, passed by the education in Côte d'Ivoire before embarking on the businesses. (Case to follow)