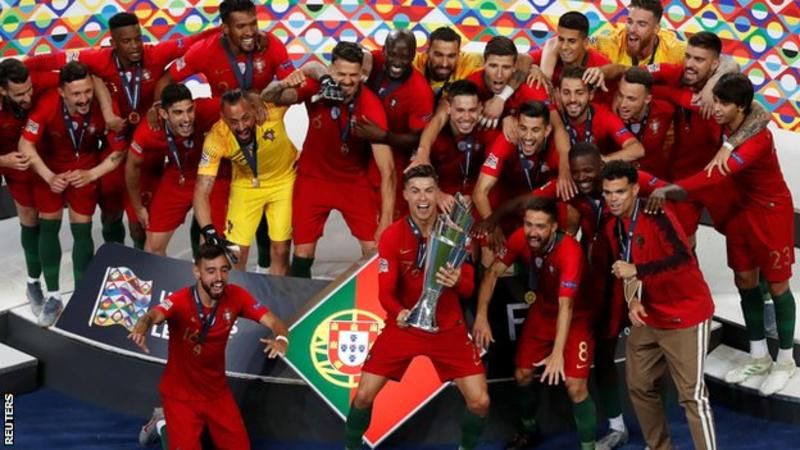 Hosts Portugal claimed their second trophy in three years by beating the Netherlands to win the inaugural Nations League.

Fernando Santos' side triumphed at the 2016 European Championship and Goncalo Guedes' second half strike gave them a narrow victory in Porto which Santos said was evidence of their unity as a team.

"For the last five years, we have been an almost indestructible family who know what we are capable of doing," he said. "We knew we could win this match."

The victory was achieved through Guedes, the Valencia winger smashing in from the edge of the area following Bernardo Silva's clever cutback, though Dutch goalkeeper Jasper Cillessen will be disappointed he did not keep the effort out.

The Dutch looked to get back into the game but Memphis Depay's powerful header was well saved by Wolves number one Rui Patricio and ex-Middlesbrough midfielder Marten de Roon lashed over.

England finished third in the tournament after a victory on penalties over Switzerland in Guimaraes.

The game was billed on the clash of the two influential captains - Portugal forward Cristiano Ronaldo and Netherlands centre-back Virgil van Dijk.

Both players claimed silverware at club level last season, Ronaldo winning the Serie A title with Juventus, while Van Dijk contributed to ending Liverpool's seven year wait for a trophy by triumphing in the Champions League.

Ronaldo, 34, scored a sublime hat-trick in the semi-final victory over Switzerland but was unable to add to his 88 international goals, seeing a thumping, goalbound drive blocked by the towering Van Dijk.

The closest he came to netting was when he skipped past two defenders from the left, but stuck a shot straight at Barcelona's Cillessen. He also smashed a free-kick wide late on.

Former Southampton and Celtic player Van Dijk was his solid, assured self at the back but could do nothing about the winning goal, though Cillessen was unable to keep out Guedes' strike having got a hand on the effort.

Manchester City's Silva, who set up the goal, said: "I am very happy and very proud. It is my first title with Portugal. After the amazing season with my club, to finish this way is amazing. It is time to rest now and prepare for next season and try to do even better.

"The most important thing is that Portugal won. If you can add to that individual awards, then even better."

Portugal are now unbeaten in their last 10 games and despite defeat, Netherlands - who have failed to reach the last two major tournaments - will take heart from their progress since the appointment of Ronald Koeman as boss.

"They were masters at defending when they were ahead," said Koeman. "We should have been a bit more clever in looking for free kicks. We were not good enough tonight."

How did two potential summer movers do?

With the international transfer window about to open on Tuesday, clubs will be gearing up to complete signings in time for the new season.

Two players who have been heavily linked with moves were in action in the final and highlighted why their signatures will be so sought after.

The 24-year-old was one of the best players on the field with his lively movement and eye for goal. His six shots in the match were more than any other player, forcing Cillessen into making saves, albeit to efforts from long range.

Netherlands defender Matthijs de Ligt is another who has been heavily linked with a move to United as well as Barcelona and the teenager captained Ajax to a Dutch league and cup double.

Playing alongside Van Dijk, the 19-year-old impressed at the back once more, contributing six clearances and three tackles for his side and also winning the ball back three times.

• Portugal are the first European nation to host and win a final of a major competition since France beat Brazil 3-0 in the final of the 1998 World Cup.

• The Netherlands have lost four of their last five finals in major international tournaments (three in the World Cup, once in the Nations League).

• They remain winless against Portugal when playing them in Portugal, drawing two and losing four of their six such meetings.

• Goncalo Guedes has been directly involved in five goals in his last eight appearances for Portugal (three goals and two assists).

• No Portugal player has been directly involved in more goals than Bernardo Silva in the Nations League this season (3 - joint-most with Cristiano Ronaldo and Andre Silva), while he also made the most assists of any Portuguese player (2).

• The Netherlands' first shot in this game came in the 65th minute; by which time Portugal had already had 14 shots and opened the scoring.

• The Netherlands fielded the same starting XI in consecutive games for the first time since October 2014 (under Guus Hiddink).