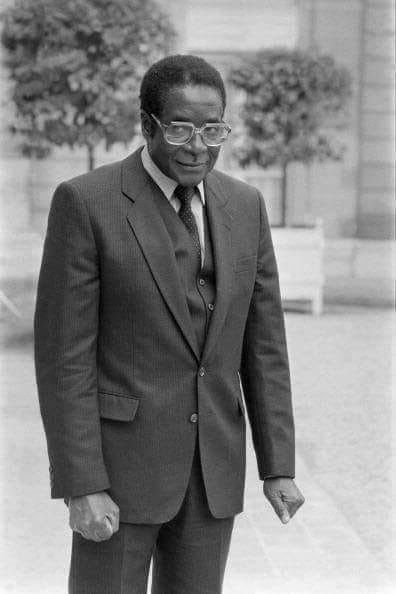 Comrade "Sekuru" Robert Gabriel Gushungo Mugabe, former President of Zimbabwe came to prominence in our generation through Bob Marley's 1980 rallying cry for freedom about Zimbabwe in "Africa Unite". Then, there was the litigation of land redistribution opposing Mugabe to the Anglo-Saxon imperialism. Litigation that the forces of Neo-Rhodesian lobby used as an excuse to rewrite the history of a country liberated from the tenacious yoke of apartheid-style colonialism on April 18, 1980… By Mugabe.

Today's Zimbabwe is the vestige of a prosperous past, witness to the ruins of Monomotapa who died for an independent country. This historical cradle of the Matabele (Ndebele) and Mashonas (Shonas) did not come into contact with European frontiersmen until the sixteenth century with the Portuguese, followed in the nineteenth century by the English under the personal initiative of Cecil Rhodes.
Rhodes, a British citizen born in 1853 immigrated to South Africa where England had two colonies; Cape Town and Natal. He made a fortune in the mining industry.
The promoted prime minister of the Cape Colony, Rhodes engineered the annexation of the territories of Matabéléland and Mashonaland. After obtaining the concession of Rudd by his emissaries on Zimbabwean lands, Cecil Rhodes is recognized by Great Britain through a Royal Charter issued on October 29, 1889, as the landowner of Matabeleland and Mashonaland

Southern Rhodesia born out of abuse an malice.

Rudd's concession was a written document in which King Matabele Lobenguela, allegedly affixed his fingerprint as consent to surrender his land to Cecil Rhodes. This illiterate king and his entourage could not read or write, so the contents of the agreement were translated by Cecil Rhode's men, the authors of the text, who rendered an oral version contrary to what was written on paper.

"Armed" with his title of a landowner, acquired by shameless thievery, Cecil Rhodes organized a Berlin type conference, where he distributed "his lands" to candidates for exploration. There were 180 white beneficiaries (Afrikaners and British), each awarded with approximately 3,172.83 acres (1,284 ha) and free gold stocks.
At dawn on May 6, 1890, these pioneers of the Zimbabwean occupation, escorted by 500 armed men formed a long column of wagons heading North. On September 12, 1890, the UNION JACK was hoisted on their "promised land"; at the current location of Harare around Harare kapje (the hills of Harare) after crossing the Limpopo and the high plateaux of Mashonaland. This European presence, initially interpreted by African natives as foreign visitors passing through their territory would be the beginning of decades of nightmarish violence.

The revolt against Rhodesian occupancy.

The cohabitation will quickly lead to the first revolt of Mashonas and Matabele led by King Lobengula against Rhodes the thief. After bloodied battles, the ill-equipped Africans could not sustain Rhodesian firepower. On November 4, 1893, the royal residence of Bulawayo Lobenguela surrendered. The official declaration of the colony of Southern Rhodesia in 1895 will provoke regained violence with the cries of "murenga!" (Rebellion) by indigenous chiefs.
On March 24, 1896, a settler was killed in the Zingwanie district of Matabéléland. This "act of insurrection" will be followed by violent chain reactions during which (white settlers) were hunted down to the trenches of the now fortified Bulawayo. The ancient royal city was surrounded by indigenous warriors. Other Rhodesian colonialists who survived the fury of the (Matabele) took refuge in Gwelo and Beligwe.

Rhodesian troops sought reinforcement of English royal troops stationed in the Cape (South Africa). Defeated by the British, the Black African rebels abandoned the siege of Bulawayo and retrenched in the hills of Matopos and Teba-Zika-Mambo where they will be slaughtered with dynamite on July 5, 1896.
In Mashonaland, the guerrillas resisted a while longer to Lieutenant Colonel Alderson's troops. However, he was later able to clear the Salisbury-Umtali road. The ensuing repression killed everything and everyone on sight. Caves and taverns where women, children and the elderly took refuge were blown out. Kagubi and Nehanda, leaders of the guerrillas, captured by the British were hanged as criminals on April 27, 1897 for trying to restore the customary justice and order dismissed by the oppressor.

Southern Rhodesia was born out of the ruthless repression that will follow this last racial confrontation where a mere 200.000 strong super armed "white thugs" will hold captives for decades, 5 million Africans paralyzed by fear of the white canons... Until Mugabe saved his people.

Comrade Mugabe, Rest in peace, where heros from your land do not die of old age or sickness.