South African President Cyril Ramaphosa, next to a sculpture of former President Nelson Mandela, addresses supporters from the balcony at the city hall in Cape Town South Africa, Tuesday, Feb. 11, 2020. Today marks the 30th anniversary of Mandela's release from jail and his first address to African National Congress supporters after his release from jail after serving 27-years behind bars. (AP Photo/Nasief Manie) 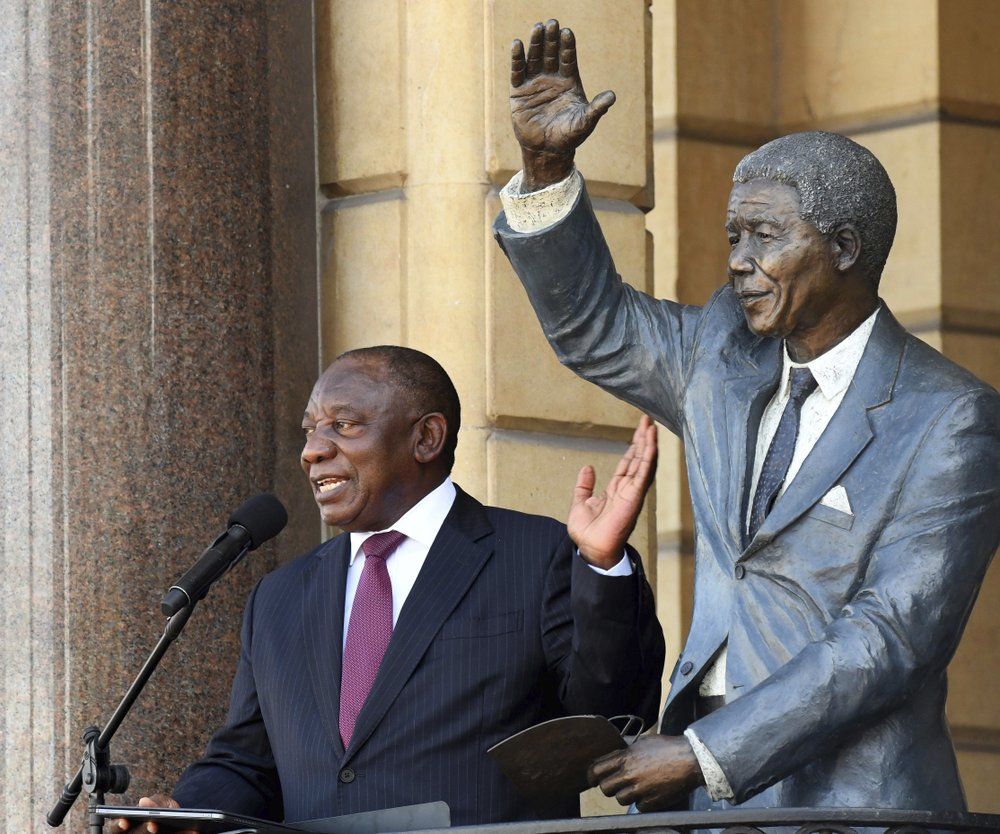 Thirty years ago, Nelson Mandela was released from 27 years of imprisonment by South Africa’s apartheid regime and instantly galvanized the country, and the world, to dismantle the brutal system of racial oppression.

Raising a clenched-fist salute and striding purposefully from the gates of Victor Verster prison, Mandela, then 71, made it clear he was committed to ending apartheid and establishing majority rule and rights for all in South Africa.

His release gave many South Africans their first view of Mandela because during his imprisonment the regime banned the publication of images of him and his speeches. And then, suddenly, he was on national television, urging massive changes.

“Comrades and fellow South Africans, I greet you all in the name of peace, democracy and freedom for all,” Mandela said hours after his release, speaking to throngs of supporters at Cape Town’s City Hall.

On Tuesday, current President Cyril Ramaphosa, who held the microphone during Mandela’s address, dramatically returned to the City Hall to address the nation, saying Mandela’s stirring address was a “speech that birthed a nation.”

Just over four years after his release, Mandela was elected president in the country’s first all-race elections, leading South Africa out of decades of violently imposed discrimination. Under his leadership, South Africa drafted and passed a constitution widely praised for upholding the rights of all, becoming one of the first to explicitly endorse gay rights.

A Truth and Reconciliation Commission took South Africa on a compelling, painful path to air the injustices perpetrated during the more than 40 years of apartheid rule.

Mandela, and then South African President F.W. de Klerk, who freed him, won the Nobel Peace Prize in 1993 “for their work to peacefully end apartheid and for laying the foundation for a new democratic South Africa.”

“Nelson Mandela emerged from prison to dazzle South Africa and the world with his warmth and human values,” wrote Tutu and his wife, Leah, in a short statement. “Circumstances and priorities change over time, but good values don’t go out of fashion. We miss him. Love and blessings.”

Magnanimous, charismatic and inclusive during his one term as president which ended in 1999, Mandela led South Africa to a new era of democracy. In retirement he remained active in encouraging rights for all.

Today’s South Africa is dogged by serious problems of inequality, poverty and violence, largely a result of the stubborn legacy of apartheid. Some South Africans have criticized Mandela for making too many compromises, especially to the white minority, which continues to enjoy prosperity.

Standing beside a statue of Mandela at Cape Town City Hall Tuesday, Ramaphosa said the country still struggles with racial divisions and inequality and strives to live up to Mandela’s legacy.

“Millions of our people continue to live in poverty ... the divide between haves and have-nots continues to widen,” said Ramaphosa.

Ramaphosa said Mandela’s release “was a defining moment in our onward march toward democracy” in a statement to mark the anniversary.

But “inequality, especially as defined by race and gender, remains among the highest in the world. Unemployment is deepening and poverty is widespread. Violence, including the violence that men perpetrate against women, continues to ravage our communities,” Ramaphosa said.

He urged all South Africans to take inspiration from Mandela’s legacy to work together to help solve these problems.

The last president of apartheid said that “South Africa in 2020 is emphatically on the wrong road: it is headed not toward a ‘New Dawn’ but toward very dark and threatening storm clouds.” He urged South Africa to follow Mandela’s example and ”return to the road of freedom, toleration and non-racialism.”