In the tradition of the Krou people, each ethnic group has its history. We hope that our contribution will bring to light the origins of the brave Gouro people of the Ivory Coast and their ancestral links with other ethnic groups in the "far" West of the country.

Among the first settlers of the Ivory Coast, the Gouro are an integral part of the foresters. For centuries, they lived with others in the rainforest where they led a community life without social upheaval, as hunters according to their African customs, with mystical powers to the point where they wanted to rule among others, the Bétés, claiming their fair share of games in warfare.

Other foresters then started calling them (bilignoan), which means: untrustworthy in Bété. The Gouros felt humiliated. Negotiations to achieve social appeasement were engaged to no avail. Then, the wise of the majority (Bété) decided to impose sanctions: (GIou wanamè), which means: (even if they no longer are part of the large family, they will not dig a hole to live in. They will have to move elsewhere). Hence the name (Gour) which became (Gouro) by the white colonizers. Even today, the same term (GIou wanamè) in Gouro means (here is a hole). The Gouro still call the Bété, the SIAN, as in Nanan Sian of CE1 / CE2 history books with the national flag cover, page 12 CEDA edition. (SIAN) was the first name of the founding fathers of the current Ivory Coast in 1069 (11th century) after Christ.

As the story goes, the Gouros left the Bétés, just as the Bétés fearing high waters in the South-West, left the Krou people to head for the rainforest. Thus, after many misunderstandings, the (Gour) left their Bétés brothers for the savannah where they build their first village; the modern-day Bouaké.

In 1720 (18th century), the Baoulés, migrating from EL MINA (GHANA), met the Gour on these lands. In the 19th century, French colonizers, encountered these two groups of people with different customs: (patriarchy for the Gouros and matriarchy for the Baoulés). In their inquiries, the white men wanted to know who built the village. A Baoulé pointed to a Gour and said in his patois (yo ôlè): ( Them). Lost in translation, (Yowlè) does not make sense in the Akan tradition. There are no Baoulés Yowlè, instead Gouro Yowlè, the main objects of the expression.

The Gour did not much appreciate the Savanah climate so they returned to their natural environment, the rainforest, where they founded the village of Oumé. Both, the cities of Bouaké and Oumé were founded by the Gouros, not by those who occupy them today.

One cannot rely on the 18th-century account of French colonizers to establish the true story of the Gouros, insofar as it is well documented that the Portuguese knew of the existence of the SIAN of 1069 since the year 1469, as well as the English in the 17th century when they showed up in the South of the country.

The history of mankind is related to origins as an umbilical cord, because it is a fundamental experience that is not meant to please one and to flout others. Men of old had traditional laws and rules that they observed daily, according to their African customs. Today, all the fundamental virtues are rejected by modern society, and the history of peoples is the victim of dishonest accounts by those who do not have the right to write it. History is the compass that indicates the way forward for the progress of social rights. We must fully restore the continuity of our history from generations to generations.

The iconic feature of the Gouros' culture is the Zaouli traditional dance. The Zaouli mask used in the dance was created in the 1950s, reportedly inspired by a girl named "Djela Lou Zaouli" meaning (Zaouli, daughter of Djela). However, stories on the origins of the mask are varied, and each mask can have its symbolic history.

Each Gouro village has a local Zaouli dancer (always male), performing during funerals and celebrations. The dance is believed to increase the productivity of a village, seen as a tool of unity for the Gouro community, and by extension the whole country. 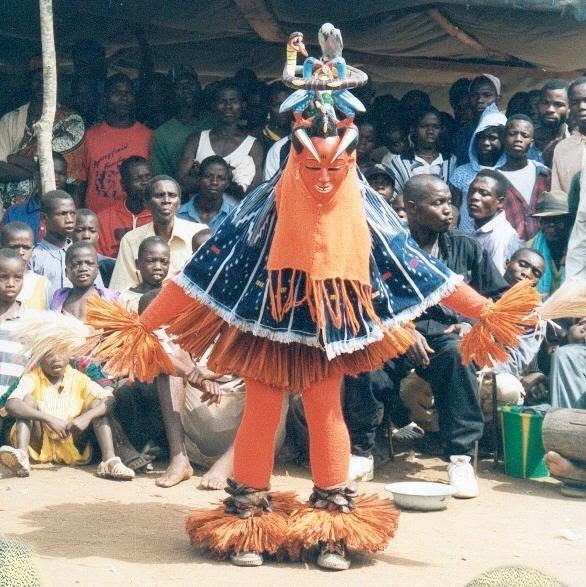 " Zaouli from the Ivory Coast"

"A Zaouli mask has a profound effect on the wearer. He is detached from everything around him ... As soon as he puts the mask on his face, he is not just a performer, but the spirit that has taken control of his body. When this happens, the dance is fast and furious. The masked man lifts the dust under his feet. Maintaining the pace of flute and frantic percussions is a superhuman effort guided by the spirits. "

The Gouro women; an economic-powered gender. Côte d'Ivoire is one of the fastest-growing economies in West Africa with an average growth rate of 8% in recent years. Food insecurity, if it exists, is mitigated by the high production of food products. Among the producers of food crops, the women of the Gouro market of Adjamé Roxy, and those of the cooperative COCOVICO (Cooperative marketing of food products of Cocody) are an example of dynamism. These women organized in a cooperative, contribute strongly to food security in Côte d'Ivoire.

The Gouro women, renowned for their courage and business acumen, do not mind the tasks in terms of agriculture and commerce. Their presence is estimated at nearly 60% of the players in the food products sector.

According to the Poverty Reduction Strategy Paper (PRSP, version 2009), in Côte d'Ivoire, agriculture is the main activity with 2/3 of export earnings and 2/3 of jobs. The food sector occupies 85% of the active agricultural population, 90% of which is manned by women in Côte d'Ivoire. Agriculture contributes 33% of GDP (Ivorian Ministry of Agriculture) and contributed to the development of the secondary and tertiary sectors. All these figures allow us a glimpse into the key role of women in food security and the Ivorian economy, especially that of women food producers mostly made up of these brave Gouro women.

Long relegated to the background for the benefit of export crops such as coffee, cocoa, and rubber, food products nowadays occupy a prominent place in Ivorian agriculture. It has been heard many times: " The success of this country is based on agriculture." Supply markets for food products, commonly known as Gouro markets, are full of fresh products such as plantain, cassava, tomatoes, cabbages, aubergines, peppers, and spices, used to feed metropolis such Abidjan. Cities such as Bouaké, Sinfra, Tiassale, Divo, Guiglo, Bouafle, Danané (located in the Mid-West and the West of Côte d'Ivoire), are where the products are shipped from.

Women such Boty Lou Rosalie, Mrs Irié Lou Colette, President of the Federation of Cooperatives of Women Producers of Viviers of Côte d'Ivoire, started as a simple marketer of food products with a fund of 25,000 Fcfa (about 38 euros). Today, the federation has more than 1,800 women farmers' cooperatives with 5,000 members. The late Ms Boty Lou Rosalie, Cocody's COCOVICO Market Administrator, was a member of the West African Agribusiness Operators Network. This dynamic economic operator, a leader in the food sector, was an essential leader in the development of Zuénoula (her native region).

It has been established that one of the best ways for women to overcome poverty is to organize themselves into cooperatives (community activities). The best way to get large amounts of money and gather skills. The mode of operation is a voluntary membership open to all. The example of COCOVICO demonstrates the effectiveness of such groups when funding is needed. This cooperative received funding of 1.5 million euros in 2004 from the microfinance institution OikoCredit. In March 2016, the debt was repaid.

The Gouro women producers and traders of food crops are a real living examples of courage. Their daily life starts in the morning in cities in the Mid-West through the purchase of products. They are then busy transporting them to the economic capital until the next morning to deliver the products to wholesalers. The Gouro women of the Ivory Coast are indeed a true example of self-empowerment.