Former Chelsea and Manchester United boss Mourinho has signed a contract until the end of the 2022-23 season.

"The quality in both the squad and the academy excites me," said the 56-year-old Portuguese. "Working with these players is what has attracted me."

Spurs chairman Daniel Levy said: "In Jose we have one of the most successful managers in football."

Mourinho will hold his first news conference as Tottenham boss at 14:00 GMT on Thursday.

The Portuguese's basic salary is £8m a year, significantly less than his pay at United, which was around £12m.

Lille coaches Joao Sacramento and Nuno Santos will join his backroom team, the French club have confirmed, while he will also be reunited with fitness coach Carlos Lalin and tactical analyst Giovanni Cerra, who both worked under Mourinho at United. 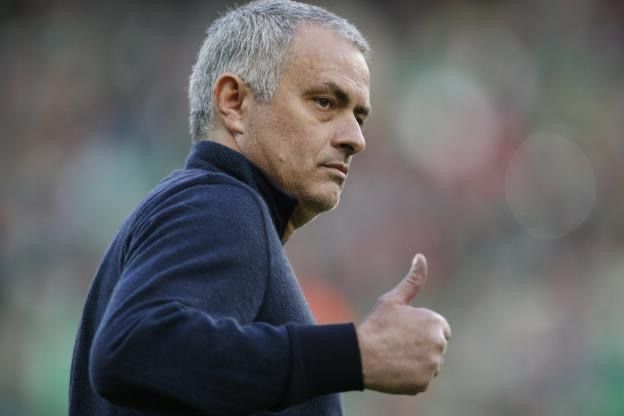 Tottenham reached the Champions League final last season under Pochettino, but lost 2-0 to Liverpool in Madrid.

The Argentine, who was appointed in May 2014, did not win a trophy in his time in charge of the north London club, with Spurs' last silverware being the League Cup in 2008.

Levy said Mourinho has "a wealth of experience, can inspire teams and is a great tactician".

"He has won honours at every club he has coached," he added. "We believe he will bring energy and belief to the dressing room."

Having taken over at Manchester United in May 2016, he won the Europa League and Carabao Cup with them in 2017.

Mourinho was sacked by the Old Trafford club in December 2018, with the club 19 points behind league leaders Liverpool, and had not managed another side before joining Spurs.

He has also previously managed Portuguese side Porto, where he won the Champions League in 2004.

At Italian club Inter Milan, Mourinho won a league, cup and Champions League treble in 2010 and was named Fifa's world coach of the year, while he led Spanish team Real Madrid to the La Liga title in 2012.

He takes over a Spurs side that are without a win in their past five games and have slipped to 14th in the Premier League, 20 points behind leaders Liverpool after just 12 matches.

Tottenham Hotspur Supporters' Trust had said "many fans thought Poch had earned the right" to try to turn around the side's form and that "there are questions that must be asked of the board".

Following Mourinho's appointment, it said it had "concerns about how Jose and our club's executive board will work together".

It added: "The club must ensure it does not find itself in the same position in two or three years' time, and we need to hear from the executive board what the long-term thinking behind this appointment is."

Mourinho's first match in charge is a trip to West Ham United on Saturday (12:30 GMT kick-off).

Spurs go to Manchester United on 4 December, and host another of Mourinho's former teams - Chelsea - on 22 December.

Mourinho has turned down a number of managerial opportunities, including in China, Spain and Portugal, since leaving Old Trafford.

But Spurs have come a long way in recent years under Pochettino. They have a new £1bn stadium and training ground, and spent four successive seasons in the Champions League.

They now have a European pedigree, and a hugely talented squad.

Mourinho has been out of the game for almost a year but retained a home in London.

His tribulations at Manchester United saw him lose his 'Special One' status, but his many achievements in the game still command widespread respect.