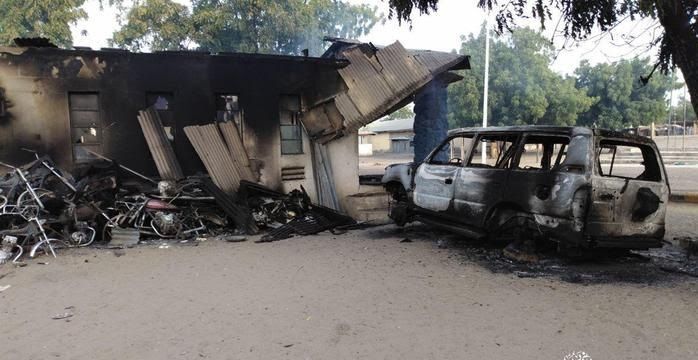 (Chard carcass of SUV involved in a terrorist attack in Ouagadagou. B.F)

Some of West Africa’s biggest economies are increasingly vulnerable to attacks by Islamist militants, whose influence is spreading to the inland borders of coastal nations.

Heavyweights Ghana and Ivory Coast as well as smaller neighbours Benin and Togo are strengthening security along their boundaries with Burkina Faso, which has seen a surge of attacks by al-Qaeda and Islamic State-linked insurgents this year. The raids have spread so fast that the government has imposed a state of emergency in several regions and replaced most senior military commanders earlier this year. Nations from Germany to Qatar pledged this month to help ward off the Islamist threat.

Islamist militancy in Burkina Faso is threatening its neighbors

Two French tourists went missing last week and their guide was killed in a nature reserve in northern Benin, a country that’s never experienced Islamist militant violence before. While the fate of the tourists remain unknown, their burnt-out vehicle was found across the border in Burkina Faso.

After destabilising Burkina Faso, the militants’ next step could be “to open up new spaces of influence” in its southern neighbours, according to Rinaldo Depagne, project director for West Africa at the International Crisis Group. “These groups are likely seeking to establish footholds in those countries as they’re either launching or fleeing attacks,” he said.

At risk is the stability of some of the continent’s quickest-growing economies, with the International Monetary Fund forecasting Ghana to expand by 8.8 percent this year, the fastest in the world, and Ivory Coast by 7.5 percent. The two countries are also the world’s biggest cocoa producers.

Burkina Faso was peaceful for decades and only in recent years saw a spill-over of violence from neighbouring Mali, with the death toll reaching almost 500 in about 200 raids since the first assault in April 2015 at a mine that was owned at the time by a unit of Timis Mining Corp. The insurgency is also fuelling inter-communal conflict.

The French foreign ministry advises against visiting most of Burkina Faso

Ivory Coast has so far experienced only one jihadist attack, when gunmen from Mali opened fire on beach-goers at the coastal town of Grand-Bassam in 2016. In March, the risk of militancy from the north prompted the government of President Alassane Ouattara to reinforce border security as “the threat was judged to be closer than first estimated,” according to government spokesman Sidi Toure.

The gendarmerie deployed an additional 300 police officers to border regions while also increasing its contribution of troops to the 15,000-strong United Nations peacekeeping mission in Mali to 800, from 150 previously. Five other West African nations, including Burkina Faso, have already contributed 5,000 troops to a regional force that’s meant to patrol border areas near Mali, which has struggled to quell Islamist violence since 2012.

Ghana has done “preventative deployment” along its borders in the North, said Michael Opoku, director of operations at Ghana’s National Security agency. That includes the assignment of military staff, police and personnel from the country’s refugee authority to deal with any spillover from the situation in Burkina Faso, he said.

The value of financial assets in coastal nations will be affected only “if there are significant disturbances in terms of economic activity,” said Samir Gadio, a London-based analyst at Standard Chartered Plc, which trades debt issued by African countries including Ghana, Ivory Coast and Benin.

Still, governments are increasingly concerned about the spread of jihadist activity.

“What is happening in Burkina Faso concerns us directly,” said Fructueux Gbaguidi, chief of staff of the Beninese army. “It’s a mission that will take time. We cannot withdraw until the situation has calmed down there.”