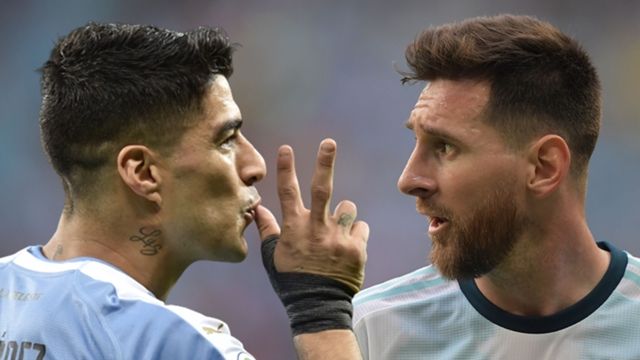 He is the Barcelona star who, fighting while seemingly oblivious to pain and the strains of age, continues to show his nation the way forward. Through his goals and his shining example the forward is an inspiration, even if his enthusiasm may go too far at times.

As the Copa America rolls on, it is not Lionel Messi who merits the description above. It is Luis Suarez - so often over-shadowed by the Argentine in Barca colours - who has retaken centre-stage to spearhead a strong bid for Uruguay's 16th South American crown.

Before the Copa began, the big question over Suarez's head was whether he would be able to join his team-mates in Brazil at all. Physically worn down and mentally devastated following his club's disastrous end to the 2018-19 season, his last game of the campaign was in Barca's horrendous 4-0 surrender to Liverpool at the start of May.

A knee operation ended his season shortly after the last ball was kicked in anger at Anfield, and the chances of him returning in time to join his nation's preparations looked slim.

But there's a reason Luis Suarez is a folk hero around the streets of Montevideo, Salto and across Uruguay. Not only did he make it back in time for the Copa; he looks like he was never away from a football pitch.

Suarez netted in both of the Celeste's opening games in Brazil, hitting the third in a 4-0 rout of Ecuador with a typically instinctive finish at the back post before slotting home from the penalty spot to level against Japan.

While he may not have found the score-sheet in Monday's Group C decider against Chile, with both sides already safely into the quarter-finals, Suarez nevertheless kept the Roja on the back foot throughout and never stopped running as he completed 90 minutes for the third consecutive Copa game.

Indeed, if any criticism can be levelled at the famously exuberant striker it is that he perhaps needs to tone down his competitive spirit. So desperate was Suarez to make the difference that he resorted to pleading for a penalty due to a handball from Chile goalkeeper Gabriel Arias, providing the tournament with one of its most hilarious moments to date.

"He has great commitment to this country's football", coach Oscar Tabarez underlined after Suarez's first game back off the bench in a warm-up friendly against Panama. "Today he looked like a player who had come off playing seven or eight games."

So far in Brazil he has shared equal billing with his eternal strike partner. Suarez and Edinson Cavani have been tormenting defences together for the Celeste for over a decade, appearing together for the first time in February 2008 where both men hit the net.

Cavani may have one more goal so far in the Copa, three to his fellow Salto native's two, but the partnership is one of equals. Just the kind of relationship that his captain at Camp Nou would love to have on the other side of the Rio de la Plata.

For while Messi comfortably out-performed his great friend in Blaugrana colours this term, the pair hitting 51 and 25 goals respectively, the tables have been turned in Brazil. Suarez and Cavani have thrived leading the line in a well-ordered, typically solid Uruguay side under the knowledgeable gaze of Tabarez, and go into Saturday's quarter-final against Peru as clear favourites after finishing top and unbeaten in Group C.

The Argentina standard-bearer has been a huge disappointment in comparison. Struggling to unleash his dizzying talents in a team that was thrown together at the last minute and changes on a match-by-match basis, his only tangible contribution to the Copa so far was a penalty to claw back a 1-1 draw against Paraguay.

Messi was again ineffective even as Argentina squeezed past Qatar to make the next round. In stark contrast to their neighbours, Albiceleste hopes are decidedly modest as they prepare for Venezuela just 24 hours before Suarez and Co. take the field in Salvador.

Even in the heat of competition, the 32-year-old Uruguayan has not forgotten about his friend, who has seen old accusations that he is more involved than he should be in team selection rise up again in the wake of Argentina's woes.

"He does not say a word," Suarez insisted to Fox Sports.

"Not about a coach, a player, nothing. And in the Argentina team I think it's the same, there were coaches who asked him things and he would say, 'no, don't ask me anything, make the decision yourself.'

"We speak about these things a lot and of course it hurts him as a human being... He takes great pride and satisfaction to want to keep showing he can continue in the national team and not give up. He will keep going until he wins something."

That may be so, but on the evidence of this year's Copa so far it is Suarez, not Messi, who is more likely to return to Camp Nou with a winners' medal hanging from around his neck. A snarling, awkward, even nasty ball of nervous energy when he walks onto the pitch, that anti-hero persona cuts a sharp contrast with the withdrawn, softly spoken man who appears when the final whistle blows.

Suarez's natural humility means that he has never had a problem with taking a supporting role behind the sparkling Argentine. His drive and fury, meanwhile, are the aspects of his character that have taken him to the top of world football - and may even ensure a second Copa win for this inveterate competitor by the time July 7's final in the Maracana rolls around.