As the saying goes: "In times of hardship only the thick-skinned prevail".
From much of the latter part of the 20th century and the wee hours of the 21st, The Ivory Coast has been the leading Cocoa producing country in the world. However, amid repeated political turmoils and intermittent civil unrest, reports of child slavery in it's  farms have plagued this tiny rich nation in the gulf of Guinee.

From 2000 onwards, sources indicated that children from neighboring Burkina Faso, Mali and Guinnee were forming the majority of laboring force…..

The world knew it was a troubled sector, but the reality revealed by the investigations and reports in recent months exceeds all that one can imagine. Slavery, massive deforestation, exploitation of children, use of glyphosate, mute authorities ... 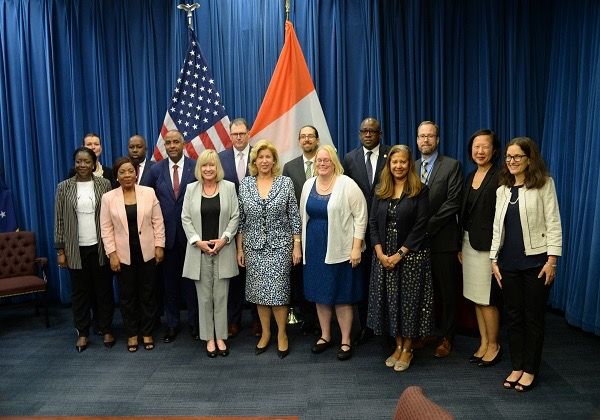 From all the news reports, something was rotten in the kingdom of the pods.
Needless to say, these kids, "sold" by their parents, too poor to feed them, work not only in total illegality (child labor is prohibited in Côte d 'Ivoire) but also without any protection against defoliants which slowly kills them and the Ivorian forest. Worse, those who are too hungry on arrival work for several years free of charge for food, before being paid by a grant of a small plot, most often in national parks. The lack of traceability of the beans allows them to join the legal circuit, with impunity.

Thus, the United has issued a threat of an embargo on Ivorian Cocoa on the initiative of Senators Ronald Lee Wyden and Sherrod Campbell Brown who are asking the US Department of Homeland Security to put a Cocoa ban on Côte d'Ivoire. At the heart of exchanges in the United States are politicians, senior administration officials and men and women of the civil society.

At this critical junction, a year before the crucial 2020 election in the Ivory Coast, First Lady Dominique Ouattara took part in a round table on the fight against the worst forms of child labor in Côte d'Ivoire held on in Washington DC in mid-September. She must be praised for taking the "bull by the horn" to fast track lobbying efforts in favor of the leading cocoa producing nation in the world. As it transpires, the finale communique indicates the lack of proper communication amongst parties involved and the promise of further talks to avoid unnecessary sanctions.
The president of "comité national de surveillance de l'exploitationet du travail des enfants", a body overseeing the ban on the use of children in farmlands of Côte d'Ivoire revealed that 85% of children involved in the culture of cocoa are enrolled in school, live with their parents and, just occasionally on holidays, help with farming chores. On the other hand, the president of "CNS", NGO "vert" and the "Walk Free Foundation" estimate the number of children victims of forced labor in the production of cocoa cannot exceed 0,17%. These numbers truly confirm the will of the Ivory Coast and First Lady Dominique Ouattara to take appropriate measures in ensuring the legitimate production of the golden pod.