Ivory Coast and Ghana team up for greater share of chocolate wealth...

By Ange Aboa and Joe Bavier

EDOUKOUKRO, Ivory Coast/JOHANNESBURG (Reuters) - Kouakou Kinimo is a pretty typical Ivory Coast cocoa farmer. He works a small holding. At 52, he's roughly the mean age for a West African grower. And, like many farmers, he doesn't want any of his six children to follow in his footsteps.

"I suffered," he said, seated beneath a tree dripping with green cocoa pods on his plantation near the border with Ghana. "I worked so hard and have nothing to show for it."

This month, Ivory Coast and Ghana - the world's top two cocoa producers - teamed up to impose a minimum floor price that chocolate companies must pay if they want to access their more than 60% share of global supply.

It's an attempt to ease pervasive farmer poverty that has become a blight on chocolate's image and a threat to the sector's future in West Africa, as young people walk away from a life of backbreaking labour with little reward.

A meeting on July 3 will hash out the details. But industry players, fair trade campaigners and even fellow producer countries are divided over whether a price fixing strategy is the answer.

While some applaud the nations' aim to use their market dominance to improve farmer incomes, others worry the strategy could push companies to buy their beans elsewhere - or over-stimulate production, leading to a global price crash.

Under the plan, Ivory Coast and Ghana will fix the floor price at $2,600 per tonne free-on-board and have announced a suspension of forward sales until the plan is put in place.

It's not the first attempt to improve the lot of farmers.

Third-party certification schemes such as Fairtrade, Rainforest Alliance and UTZ grant bonuses to growers meeting social and environmental standards. Cocoa companies have their own sustainability programmes. And Ghana and Ivory Coast both guarantee a farmer price at the start of each season.

But those measures haven't solved the problem.

"If you have a model that's based on the gross exploitation of suppliers, it simply cannot work sustainably," Edward George, an independent cocoa expert, told Reuters.

The Cocoa Barometer, a biannual report published by civil society groups, calculates that farmers receive just 6.6% of the sale price for a bar of chocolate.

And last year a Fairtrade International survey found that just 12% of Ivorian cocoa-farming households earned $2.50 per person per day, a level it calculated to be the living income benchmark.

It's a situation that angers Kinimo, who is missing a finger on his left hand, the result of an accident on his plantation.

"It's not normal at all that they, the ones eating the chocolate, set the price. The farmer should set the price," he argued. "The cars that they make, who sets the price for those? They do, and we buy them."

Farmer advocacy groups have applauded the decision, which comes as the two neighbours seek to forge closer ties following decades of rivalry.

"The only way that cocoa sustainability is going to move from being an aspiration to a reality is this type of coordinated action on price," said Jon Walker, senior cocoa advisor at Fairtrade International.

A $2,600 floor price is still about $1,000 below the level that would have assured a living income last season, but Walker thinks it's an important first step.

Even some industry players said it was less radical than they might have feared.

"Whether you look at average prices over 10 years or since 2000, you will come out somewhere between $2,400 and $2,600, so the suggested price cannot be considered unreasonable," said Pam Thornton, a consultant with Britain's Nightingale Investment Management.

In an indication of the demand for cocoa from Ivory Coast and Ghana, trade sources said that European buyers were paying the highest premium in almost a decade over London futures in order to obtain beans.

But not everyone is happy.

The head of the cocoa association of Nigeria, the world's fourth largest exporter, accused Ghana and Ivory Coast of failing to consult other producer nations.

And while Ivory Coast and Ghana said cocoa exporters, processors and chocolate makers had signed onto the plan, several told Reuters the industry faced a fait accompli.

While the floor price currently appears feasible, many in the industry are questioning how it will work if global prices fall significantly below $2,600.

"It won't," was the response of one trader who asked not to be named.

Instituting a floor price does nothing to regulate supply, which is how OPEC influences world oil prices.

"The guy in Saudi Arabia, with one push of a button he can slow down production and reduce supply to the market. But you cannot switch off cocoa production," said Michiel Hendriksz, founder of the FarmStrong Foundation.

Cocoa output is determined by the individual decisions of millions of small farmers, decisions that are heavily influenced by bean prices.

Simply raising farmers' cocoa earnings would spur production, likely at the cost of increased deforestation. Ivorian output has already doubled to over 2 million tonnes since 2000.

A deep dip in the market could force Ghana and Ivory Coast to stock beans, removing them from circulation to prop up prices.

Such an intervention, industry experts said, would be costly and difficult since neither country has adequate facilities to properly store beans long-term.

A wide, long-term gap between the floor price and prices in competing origins could also shift production elsewhere, including Latin America, cutting into the dominance of West African cocoa.

On his Ivorian cocoa farm, Kinimo has heard reports about the new floor price on the radio. He's hardly optimistic but is adopting a wait-and-see approach. After all, it's out of his hands. 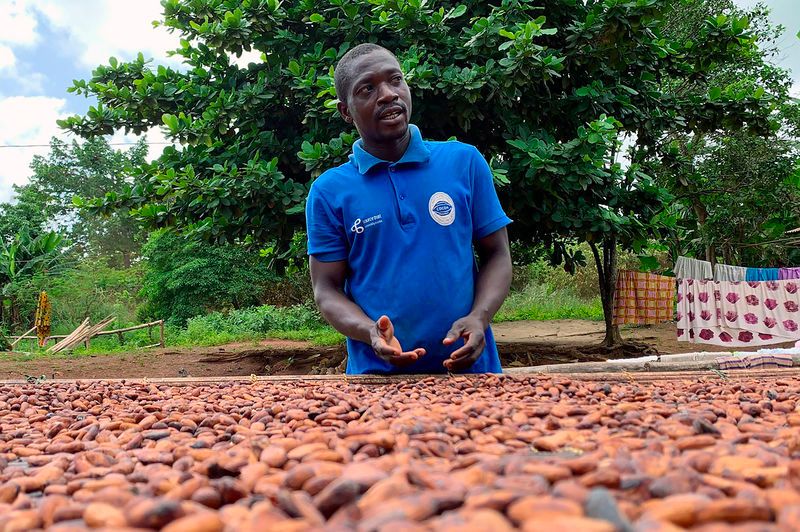