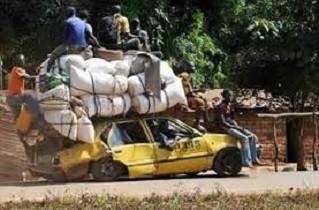 If there is one practice that has become part of public transport landscape in Cameroon, it is that of "overloading". Overloading is the practice of putting one more person in the passenger seat next to the driver. So instead of one person you will find two. The practice even extends to "bendskins (motorcycle taxis)" where there are three or even four people on a motorcycle. Inside there are 11 adults and a baby. Not counting the luggage in the back and on the roof.
"It's quite normal for us on these routes. I carry three people in front and share my seat with one of them. That's called "little driver." Because the car is wide in the back, I seat four adults. And they carry the other customers. That's how we manage. We and the passengers have no choice: the roads to their homes are bad and there are few cars to serve them," the driver explains quietly. "It has become a habit. It is almost impossible to move around, sitting alone in the front seat. Even if you offer a large sum of money, the taxi drivers "cover" you. If you insist, the driver will ask you to get out of his car and go to buy your own," says Patrick Nlend, a student and regular taxi driver.

It is quite the same for motorcycle taxis where the driver can barely move and has to do inappropriate gymnastics between his customers' legs to shift gears.

Overloading, the cause of many traffic accidents on our roads, is the best shared activity of motorists. In urban or interurban transport. A tour through the arteries of our cities and the countryside, and everyone can see that the practice is well entrenched. Illegal taxis , known as clandestine carriers, operate in specific areas of each city, such as neighbourhoods; they are prohibited from driving on high-traffic roads, even though some deviations are often observed. But more than mere clandestine carriers, they are in fact resourceful people who try to combat unemployment by providing  public transport.
There are also the Bendskins, who are drivers of motorcycles known as motorcycle taxis.  They have mastered the art of not complying with the law, and cause many accidents. Particularly  in the city of Douala, a pavilion has even been named at the Laquintinie Hospital in Douala "Bendskin Pavilion". For years they have been in a cat and mouse game with authorities to comply with the rules, i.e. to obtain an appropriate driving licence and vehicle documents , so that they can work in the areas set out for them.

Cameroon has nearly 230,000 km of main roads, 4,300 km of which are paved and well developed, although traffic is often disrupted by large trucks and untimely tolls. Funding for road maintenance is provided by the Road Fund, which was established in August 1998 under the supervision of the Ministry of Finance.
5.6 billion from the European Union was allocated to major roads projects in Africa under the 10th European Fund (2008-2013). The development of trade within the continent, regional integration, the opening up of territories condemned to autarky and access to new markets, particularly for exports, are all objectives shared by Cameroon and the rest of Africa. Debt cancellation should make it possible to concentrate massive budget allocations on the road network. The 2006-2015 sector programme defines a priority network of 23 000 km and provides for the asphalting of 200 km of roads per year. With France, the C2Ds (Contrats de Désendettement et de Développement) will be partly devoted to financing the work. Transport in Cameroon has an important role to play in the country's development, which requires adequate infrastructure to cope with population growth, the movement of people between cities and villages  and new economic requirements. 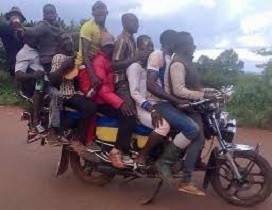