Grenoble authorities say shutdown was requested by lifeguards at the pool.

Despite the unprecedented heatwave sweeping across western Europe, lifeguards in Grenoble have shut down the city’s two municipal swimming pools after Muslim women went swimming in burkinis.

The women went to the pools twice at the initiative of the Alliance Citoyenne rights group to challenge a city ban on the full-body swimwear.

According to a statement from the town hall, the lifeguards at the pools asked for the shutdown because “they are there to maintain safety and they can’t do that when they have to worry about the crowds”. It added: “We are working towards a positive solution.”

The incident marks the latest in row over face- and body-covering garments worn by Muslim women in a country with strict laws on secularism.

France – which has Europe’s largest Muslim population – was the first European country toban the full veil in public spaces in 2011.

Earlier this year the French sports retailer Decathlon was forced to back down from a plan to sell a runner’s hijab in France after coming under fire.

Far-right politicians expressed their opposition to the burkini on Monday, the day after the event in Grenoble.

Seven burkini-clad women, accompanied by activists, went to the Grenoble pools on Sunday demanding the right to bathe despite the facility’s rules. They said the ban was discriminatory.

The women said they wanted the public pools, which currently require men to wear swim briefs and women to wear bikinis or one-piece swimsuits, to change their regulations to accommodate burkini wearers.

The local MP, Eric Ciotti, of the rightwing Republicans party, said on Twitter the burkini “has no place in France where women are equal to men”.

But the Alliance Citoyenne likened the women’s action to that of the US civil rights icon Rosa Parks.

The burkini was at the centre of a standoff in several French seaside towns three years ago, with some towns banning the garment, claiming it was a security threat, only to have the bans later overturned by a court. 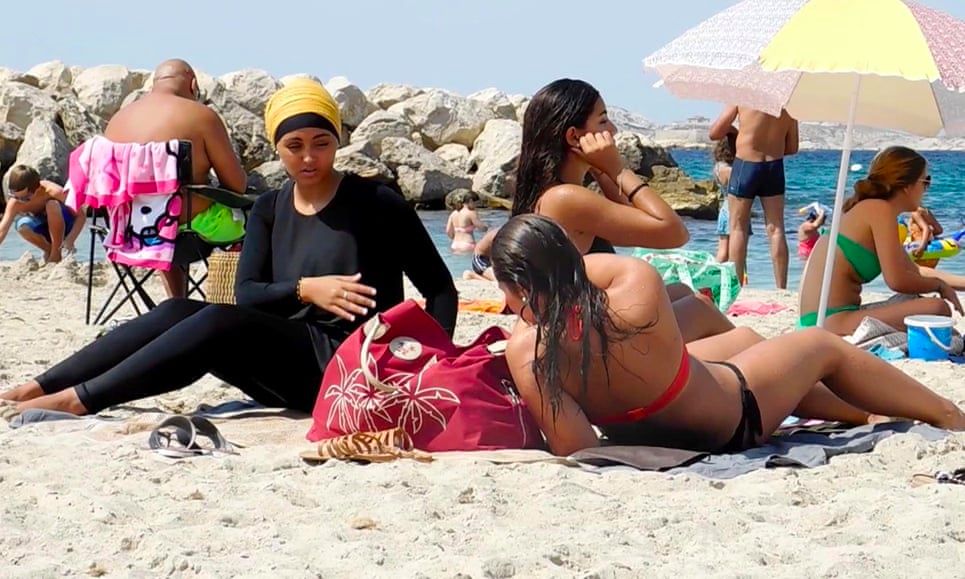