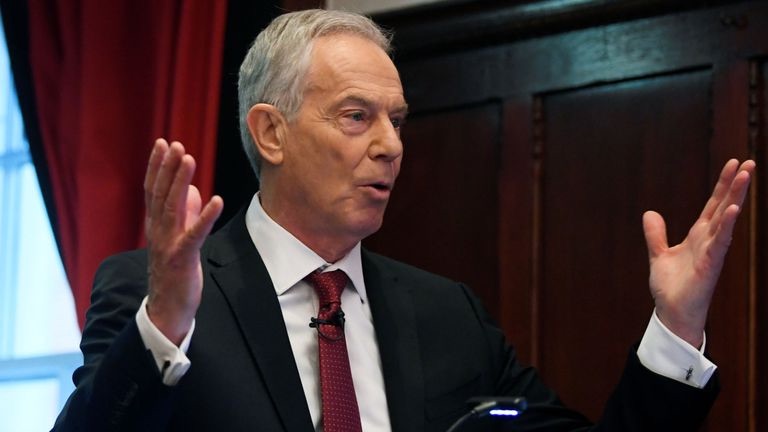 Tony Blair warns Labour 'marooned on fantasy island' and faces being 'replaced' The ex-PM claims Labour's election result "brought shame" and tells his party it doesn't have "the luxury of a slow march back".

Tony Blair has claimed Labour is "marooned on fantasy island" and faces the "stark" prospect of being replaced as a competitor for power in British politics.

In a speech in central London on Wednesday morning, the ex-prime minister said last week's general election result was "no ordinary defeat" for Labour, after his party suffered its worst election performance since 1935.

"The result has brought shame on us, we let our country down," Mr Blair said.

Who will be next Labour leader?

Setting out what he perceived as an existential threat facing the party, the ex-premier claimed Labour doesn't have "the luxury of a slow march back".

He said: "Unfortunately 2019 is much worse than 1983: then was our second defeat; now is our fourth.

"We don't have the luxury of a slow march back.

"We can correct our historical and contemporary weaknesses or be consumed by them. That choice is unmerciful.

"The choice for Labour is to renew itself as the serious, progressive, non-conservative competitor for power in British politics - or retreat from such an ambition, in which case it will be replaced.

Mr Blair described Labour's general election campaign as a "combination of misguided ideology and terminal ineptitude" and claimed it was a "cardinal error" for current Labour leader Jeremy Corbyn to have ever agreed to the election.

Labour "pursued a path of almost comic indecision" on Brexit that alienated both Leave supporters and Remain supporters, the party's former leader said.

He told an audience he was not criticising Mr Corbyn "as a person", but said the Labour leader's political ethos - which he described as "quasi-revolutionary socialism" - has "never appealed to traditional Labour voters" and "never will appeal".

He added: "The takeover of the Labour Party by the far left turned it into a glorified protest movement with cult trimmings, utterly incapable of being a credible government."

Mr Blair, who won three elections as Labour leader, intervened in the party's election post-mortem as leading MPs set out their pitches ahead of possible leadership campaigns to replace Mr Corbyn.

In a warning to those hoping to be elected the party's new leader, Mr Blair added: "The Labour Party is presently, today, marooned on fantasy island.

"I understand would-be leaders would want to go there and speak the native language in the hope of persuading enough people, eventually, to migrate to the mainland of reality.

"But there is a risk the only people speaking the language of reality to the Labour Party today are those who don't aspire to lead it."

'It was shattering': MP's verdict on election

She said: "In this election and for a long time before it people have been saying to us - not just in Wigan but in places like Ashfield and Easington - 'the system is not working and you are not listening'.

"So the first thing I think we all need to do... [is] to spend a bit of time knocking on doors, asking people what they think we should do and why they felt, amongst lifelong Labour voters, that they couldn't vote Labour this time."

Sir Keir used an interview with The Guardian newspaper to confirm he is "seriously" contemplating putting his name forward to replace Mr Corbyn after Thursday's "devastating result".

He warned the party "not to oversteer" in its reaction to the election result, adding: "The case for a bold and radical Labour government is as strong now as it was last Thursday. We need to anchor ourselves in that."

But former Labour MP Gareth Snell, who lost his Stoke-on-Trent Central seat to the Conservatives at the election, blamed the party's defeat on Sir Keir.

He posted on Twitter: "Those of us in Leave seats with small majorities in towns and small cities *begged* @Keir_Starmer to listen to us and our constituents when we told him that the party's brexit policy was losing us votes.

"He wouldn't listen and we lost."

Ms Cooper told the BBC she will decide over Christmas whether or not to run for leader and attempted to distance herself from both Mr Blair and Mr Corbyn.

She said both are "seen as internationalist, not patriots, and we should be able to be both patriotic and outward-looking because that's what we were in 1945".