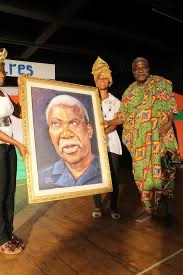 The actor and his self-portrait. Photo/other source.

The Ivorian cultural world is today mourning the passing of  veteran actor and playwright Bitty Moro aged 80,  according to sources close to his family. Mr. Moro was a pillar of culture during the heydays of Ivorian theater and cinema. Hailing from Tiassalé in the  Agneby-Tiassa region, Mr. Moro had been enthroned village chief after retiring from the industry.

For decades, Bitty Moro was a leading actor in film and theatre until he was appointed the director of the National School of Theater and Dance at Insaac, thus training many well-known artists. Bitty was born in royalty. His death is a great loss for the culture as a whole. He will be sorely missed.